TFSImage is a tool developed by Blunk Microsystems to prepare binary volume images for use in pre-programming flash devices for production. TFSImage has a GUI interface for specifying the device, file system, and input file settings that define the image. A single image can contain up to four volumes. The resulting binary can be programmed into single or multiple devices. 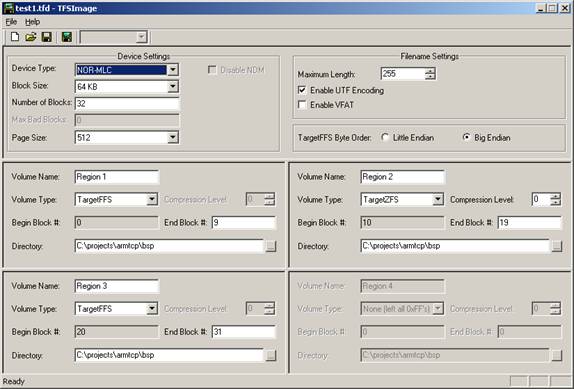 The TFSImage user interface is divided into three panels. The upper left panel defines the flash device settings; most of these are constrained by the device hardware. The upper right panel contains global file system settings that impact all volumes, regardless of type. The lower panel holds definitions for up to four flash regions that can be made into separate volumes whose data is combined in the resulting binary image.

The block size entry specifies the device's minimum erasable block size. The choices range from 8KB to 512KB, in power of two increments.

The page size entry must equal the number of bytes that are read and written in the driver's page_read() and page_write() routines. For NAND flash, the page size is determined by the chip. Also, Eclipse and M18 NOR flash have a fixed page size of 512 and 1024 bytes, respectively. Otherwise, the page size is usually configurable, with 512 bytes a common choice. The Image Tool supports choices of 512, 1024, 2048, or 4096 bytes.

The file system settings include the maximum file name length. This must correspond to the FILENAME_MAX value used by the target file system. It also contains checkboxes to indicate whether UTF file name encoding and VFAT support (long FAT file names) are enabled in the target software. These features are enabled by the UTF_ENABLED and VFAT_ENABLED definitions, respectively, in 'config.h'.

There are four types of regions. As shown below, the selections are: TargetFFS volume, TargetFAT/TargetFTL volume, TargetZFS volume, or "None", to indicate a region that is left as all 0xFF bytes.

TargetZFS regions contain an additional parameter setting: the compression level. TargetZFS is compressed read-only file system. The contents of a TargetZFS volume are dynamically decompressed when read on the target, in a manner that is transparent to the application.

The drop menu specifies a DLL that is used for Error Correction Coding (ECC). It is grayed out unless the flash type is NAND. NAND flash requires ECC encoding of file system and user data before it is written to the flash. When the Image Tool creates the binary output file, it must apply the same ECC algorithm the target system will apply when it reads the data.

TargetFFS-NAND and TargetNDM include ECC routines for drivers that perform 1-bit and 4-bit correction per 512 bytes. The two DLLs included with the Image Tool, "ecc1Blunk.dll" and "ecc4Blunk.dll", perform the same ECC as the driver routines for 1-bit and 4-bit correction, respectively. A Visual Studio project is available for creating custom DLLs for other ECC algorithms, such as when hardware ECC is used.

TFSImage has two menu bar entries: File and Help. The New, Open, Save, Save As, history, and Exit choices in the File menu apply to .tfd settings files. The Help menu entry brings up the 'About' dialog.

where “-v” turns on verbose mode.

To update a directory path in a .tfd file, the command line format is:

where # is 1, 2, 3, or 4 and specifies the region that will have its directory path updated.

Some example commands are:

In binary format, image files created by the image tool are the same size as the specified flash memory. The binary image of an 8MB device will be 8MB. If the volume only contains a small amount of user data, most bytes in the image file will be 0xFF, representing unprogrammed memory, but the total will still be 8MB.

The above is exactly true for NOR flash. For NAND, the image tool binary output file will be slightly smaller than the flash memory size because the blocks reserved for bad block recovery are excluded from the image.

To make image files smaller when they contain mostly 0xFF bytes, we provide the tool tfi2srec. tfi2srec converts the binary image to the text-based S-record format. This format consists of records, each with an address followed by data bytes.

In binary format, the volume image must contain consecutive bytes because if any were left out, the file loader would not know where the hole was and could not place the data correctly. Since each record in the S-record format has an address, the data does not have to be consecutive. This allows tfi2srec to shorten the output file by skipping strings of 0xFF bytes.

If the image contains many 0xFF bytes, the converted S-record file will be smaller. As long as the flash programmer initializes its RAM buffer to all 0xFF before loading the S-record file, the same state will result as if the larger raw binary file were loaded. But the smaller file will give a faster download time. Flash programmers, such as from Data I/O or BP Microsystems, usually have a convenient command for initializing their input buffer to all 0xFF's.

So, tfi2srec has two contrary effects. First, it converts a binary file to a text format. This will tend toward making the output larger, because each binary data byte is converted to two ASCII characters, plus an address, a checksum, and some other characters are added to each record. But tfi2srec also omits strings of 0xFF bytes. If the file contains mostly 0xFF bytes, this will tend toward making the output smaller.

tfi2srec is meant to be applied to images that are mostly empty. Its command line format is: